Road Trips Across the Globe

Is Paris on your upcoming travel list? Lucky you! I can’t pick just one favorite thing to do … but here are four of my favorites in this beautiful French city!

It’s been said before, and I’ll say the cliche again: Paris is always a good idea.

Each and every time I visit Paris, I fall in love with something new about it. From shopping to strolling, and sightseeing to sipping cappuccinos, Paris was pivotal in my transition from immature teenage traveler focused solely on fashion to Wanderlost explorer constantly seeking unusual, memorable adventures.

In a city with more to do than hours in the day, it’s tough to set time aside for a walk. But you must.

A walk along the Seine is quite possibly the best way to soak in Paris. Similar to following along the Thames in London, a Seine stroll provides stunning views of Paris’ most popular sights including Notre Dame, the Louvre and the Eiffel Tower.

But the Seine is more than sightseeing; it’s also a great way to experience Paris’ core culture. Throughout the day, runners, bikers, walkers, commuters, artists and musicians fill the tree-lined Seine path for their daily Parisian routines, be it exercise, employment or pure enjoyment. Even as an out of towner, a simple stroll along the Seine places you smack dab in the middle of Paris’ culture — a place Wanderlost explorers love to be! 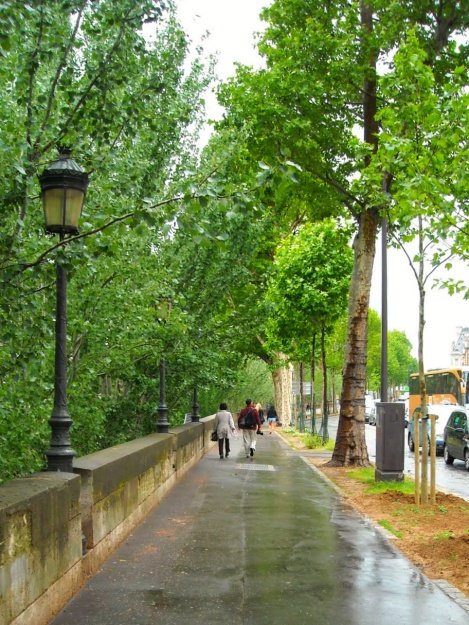 From the sparkling pyramid exterior to the smiling Mona Lisa, the Louvre has a little magic for everyone.

If you love photography, the Louvre’s glassy pyramid exterior will be a dream. An early morning photo session captures empty streets and a transparent view from the Louvre pyramid through to the massive Louvre Palace. Fast forward 12 hours and you have an entirely different shot. At night, the Louvre pyramid and Palace are lit up, with glowing hues of bright golds and yellows under the twinkling night sky.

And that’s just the outside. Wait until you go in.

Home to more than 70,000 pieces, including the famous Mona Lisa, the Louvre is one of the largest and most popular art museums in the world. On one hand, the mass amount of art is great because you can see an incredible variety under one roof, er, pyramid. On the other hand, this variety can bring on some major FOMO, because there’s absolutely no way you can see it all in one day. In fact, for serious art lovers, it could take weeks.

If you’re following a Wanderlost travel plan, you probably don’t have weeks to spend on art, so hit the highlights (i.e., Mona Lisa) first, then spend the rest of your time wandering. Given the large quantity of stunning artwork, there are few better places for cultural wandering than the Louvre.

No trip to Paris is complete without a stop at the Notre Dame Cathedral.

If it’s your first time to Paris, definitely go in and heck, if time allows, climb to the top. Notre Dame is the greatest cathedral in France for good reason, and the outside is only half of it. The steep, arched ceilings and colorful altar continuously captivate visitors, and a climb up the Cathedral tower’s nearly 400 steps will get you up close and personal with the Cathedral’s beloved gargoyles — not to mention the breathtaking views of Paris.

Even if you’ve visited Paris 20 times (lucky you!), the Cathedral is still worth a visit. Listening to the bells, appreciating the architecture or even a quick walk by will remind you time and again how captivating the Notre Dame Cathedral can be.

If you want to get absolutely Wanderlost in Paris, walk to Montmartre. You’ll pass through the good, the bad and the ugly of Paris neighborhoods — from fashion-forward boutiques to KFCs to pawn shops — before climbing up 130 metres to this beloved, charming neighborhood.

Montmartre is known best for Basilica of the Sacré-Cœur, a Roman Catholic church with an incredible stained glass interior that sits at the highest point in the city. The Montmartre neighborhood is a haven for artists, including Van Gogh, Picasso and, more recently, Johnny Depp. It has also served as the backdrop for popular Parisian films, including “An American in Paris” and “Moulin Rouge!”.

Know before you go

Sure, you can drink at one of Paris’ many cafes, restaurants, bars or nightclubs, but if you have limited time or money, buy a bottle of French wine and drink along the Seine. It’s common practice for Parisians, so don’t worry about the cops. As long as you’re acting acceptable, the police deem Seine drinking an acceptable river-side pastime.

Also — on a completely unrelated and quite boring topic — take note that the Charles de Gaulle Airport isn’t close to the city. It’s about 45 minutes to an hour away depending on traffic, so build in some time for any reservations or time-sensitive plans on arrival/ departure days. Nothing’s worse than rushing through your first or last minutes in the beautiful city of Paris!

Heading beyond Paris on your upcoming Eurotrip? Here are all of my favorite European destinations!

Welcome to The Wanderlost Way, an award-winning road trip travel blog by travel journalist and filmmaker Stephanie Vermillion. Head over to the about page to learn more about my journey on and off the road!