Road Trips Across the Globe

If you’re looking for things to do in Rome, you’ll undoubtedly find dozens upon dozens of recommendations — it’s one of Italy’s most popular destinations, after all. After a month living in Rome, here are six of my favorites.

I have a special place in my heart for Rome. It’s the first international place I lived, and now, following my study abroad experience, those quintessential Roman must-dos like the Colosseum and Vatican are more than just sights to see – they’re stories.

I studied abroad in Rome during summer 2009, taking courses on international communications and video production. Like most study abroad trips, the curriculum was one-third classroom, two-thirds experiences.

I learned how to get great B-roll while filming in the Colosseum. I learned how to get outside my comfort zones on a city scavenger hunt, left to my own devices. And I learned that experiencing is much different than sightseeing, which is probably how I ended up here today on The Wanderlost Way.

As anyone who’s been to Rome can attest, this history-rich city holds way more than you can fit into a couple of days. Heck, it’s probably tough to do it all in one week.

But no matter how much time you have, if you’re in Europe and haven’t been, you should go. It’s a popular bucket list destination, and for good reason. The ancient city of Rome is the closest we’ll get to time travel during our lifetime, and for you adventurers out there, it’s one of the easiest places to get Wanderlost in the world.

I’ve visited the Colosseum multiple times, and somehow, it’s always a different experience. The first time, I was captivated by the history for, oh, a good 10 minutes before asking my mom if we could go shopping. I was in my teens, so 10 minutes of awestruck is saying something. Ugh, cue the applause for that stage being over.

The second time I visited was while studying abroad, and fortunately my terrible tweens had passed — I was captivated. From start to finish of our Colosseum tour, I was back in the BCs.

Half the time I wore my gladiator hat, attempting to navigate the labyrinth of tunnels as I prepared to take on my fellow gladiator. In other moments, I was among the rowdy Romans, chanting, cheering and carrying on as the gladiators battled to victory.

After all the excitement on and off the fighting floor, you can bet I slept well that night.

My third Colosseum trip was by far my favorite. I went super early in the morning to get some B-roll before film class, and ended up having the Colosseum almost entirely to myself.

Sadly I was already late to class, so I had to scoot pretty quickly — but believe me. I’ll remember those early morning hours for future visits, because catching alone time in the Colosseum is nothing short of a miracle.

No trip to Rome is complete without a day in the Vatican. I mean, it’s science. (Duh.) But instead of telling you about everything you already know you need to see at the Vatican (St. Peter’s Basilica and the Sistine Chapel, most notably), here’s the rundown of my favorite, more off-the-beaten-path, Wanderlost activities.

First, send yourself a postcard from inside the Vatican. Since it’s technically a separate city, the Vatican has its own postage and mailing system. A postcard sent with authentic Vatican postage is a unique souvenir you can frame or add to a scrapbook.

If your schedule allows, my second tip is get to the Vatican when you can see the pope. Especially if you’re lucky enough to see Pope Francis! We stumbled into a Pope Benedict blessing during my study abroad trip (Wanderlost luck, I guess), but you can plan for it ahead of time in case you’d rather not leave it to fate. 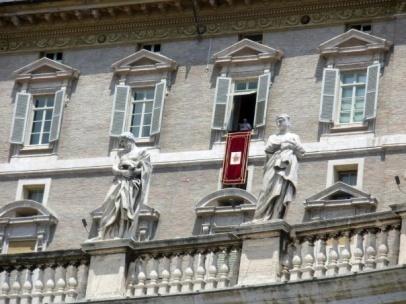 After a full day in the Vatican, it’s time to treat yo self (lookin’ at you, Tom Haverford) to arguably the best gelato in all of Italy — Old Bridge Gelateria. If the line of both tourists and locals doesn’t sell you, the heaping scoop of whipped cream on top of the already delicious gelato will.

If you’re sick of battling tourists at Rome’s top sights, get out of the city with a (very bumpy) bike ride along the Appian Way. You can book your tour through a service like Top Bike Rental, and plan for a half-day full of history, heat and humor. (For some reason, the pure agony of biking along a bumpy cobblestone street under the beating sun is actually pretty hilarious.)

The bike ride takes you along the 2,300-year-old Appian Way, into part of the Roman countryside where ancient aqueducts stretch into the horizon. Our bike guide led us through the tangled web of Rome’s past, as well as the crazy mess of Rome’s treacherous traffic today. Unless you’re an uber-experienced cyclist, I’d recommend a guide for  safely getting through those roads.

A bit more off the main stretch, Villa Borghese is the Central Park of Rome. It was close to our study abroad apartment, and became my go-to, slightly painful running route. Villa Borghese’s severe hills are probably the only reason I was able to fit in my pants that summer, because I sure didn’t hold back on the gnocchi and bruschetta.

Villa Borghese’s tree-lined streets, musicians and local artists make it a perfect spot for people watching, picnicking or napping under the park’s trees. If you have extra time in Villa Borghese, there’s also an art museum that’s worth checking out.

Spanish Steps in the Early Morning

But I promise you – the Spanish Steps are still worth seeing.

If you want to see them without the crowds and chaos, visit the Spanish Steps early in the morning. We went out there right after sunrise and had them all to ourselves, besides a few street cleaners and commuters. Of course, the tourists came quickly, but for that moment, we had serenity on the Spanish Steps … and that was heavenly.

No visit to Rome is complete without a stop at the Pantheon. We were lucky enough to have the Pantheon on our path to and from the classroom (a dream!), and it’s pretty centrally located for those not studying abroad. Plan to visit midday to get the light beams coming through the ceiling, and note you’ll only need about 30 or so minutes to see it in its entirety.

Know before you go

Despite its high quantity of tourist sights, Rome still has plenty of places to get Wanderlost. Explore areas outside the main city center to get a feel for life in Rome.

When I studied abroad, I lived north of the Vatican on the outskirts of town. This gave us the chance to enjoy unexplored parks, eat at truly local restaurants, and visit the hustle and bustle of the weekend market place.

Traveling beyond Rome? Click through here for some of my favorite destinations in Italy!

Welcome to The Wanderlost Way, an award-winning road trip travel blog by travel journalist and filmmaker Stephanie Vermillion. Head over to the about page to learn more about my journey on and off the road!